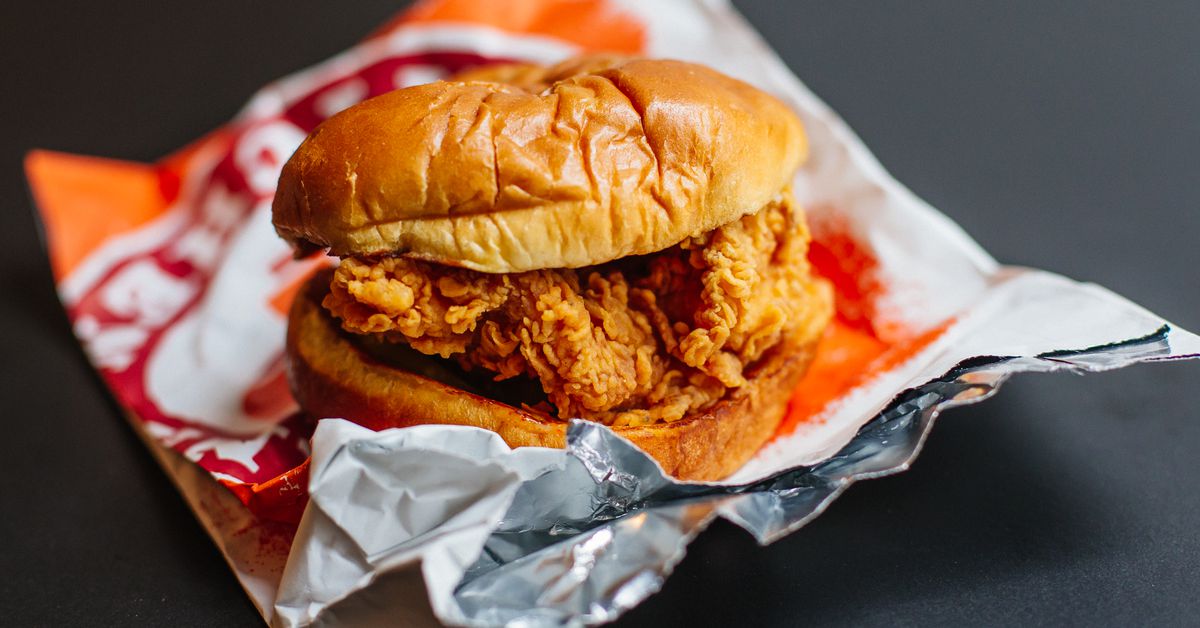 It’s 2020 and you think that the Great Chicken Sandwich Wars of 2019 are finally, safely in your rearview. That’s because you are stupid. You’re laboring under the assumption that Americans are now over evolving iterations of fried chicken. This is not true and it will never be true. Fried chicken is a god food and Americans respect it too much to let it go. And the fried chicken sandwich remains an ideal vessel OF that god food.

Except for one thing.

For background: I have had both the Chick-fil-A sandwich and the Popeyes sandwich. They’re both good, because of course they are. The CFA one is better, based purely on taste and definitely not based on the many socioeconomic factors that have turned chicken sandwich preferences into a form of political caucusing. The Popeyes one is also good, but it ain’t as good as their usual bone-in chicken. Nothing is. Also, the spicy CFA sandwich is spicy because of the breading, whereas Popeyes has to go and mayo up your shit if you want yours spicy. But as those two sandwiches battle for supremacy — with McDonald’s still thirstily trying to enter the fray like an unwelcome party guest — they are all still missing that one vital ingredient that could lead to world chicken sandwich domination…

You’re at Eater, so you probably already realize that dark meat is the superior chicken meat. That’s now a prerequisite connoisseur take, along with hating filet mignon as a cut of beef and pretending to like bone marrow. All of the major fast-food chains use white meat as the base of their fried chicken sandwich, almost certainly because it’s easier from a production standpoint and because Americans are exactly the type of nutritional hypocrites to request a lean cut of bird for a goddamn fried chicken-burger — with fries and a Coke on the side.

As it stands now, the only place that uses dark meat is David Chang’s Fuku, which has a grand total of five locations nationwide (a sixth is coming soon, oh boy!) and includes all of the unpleasant, casual militancy of the Chang empire’s other restaurants. I shouldn’t have to rely on one of the designated food oligarchs to make this upgraded chicken sandwich a reality on a national scale. Dark meat is cheaper than white meat. It also happens to have, you know, flavor. We currently consume so much white meat that livestock conglomerates are genetically engineering chickens to have LARGER breasts, which is both appalling and — from a heartless, taste perspective — produces even drier breasts, as if such a thing is possible.

Frying up boneless dark meat is a comparative rarity here in the United States. But if you’ve ever had it, you know that both Popeyes AND Chick-fil-A have fucked up their recipe calculus. Every time I eat karaage (often made with dark meat) at a Japanese restaurant, I’m left both rapturous and baffled as to why I couldn’t get fried dark meat at, like, a Wendy’s if I were so inclined. Wendy’s Twitter, if you’re reading this like the omnipresent brandbot that you are, kindly get fucked.

As a teenager, I bussed tables at an Austrian restaurant. Given my age and hygiene, I had no problem eating the more pristine leftovers I brought into the kitchen from the restaurant’s dining room, including bread, steak, and entire lobster tails. But the best food I scavenged was a traditional Austrian fried chicken dish called backhendl. At our restaurant, the dickhead chef prepared it using a deboned leg quarter and it came out of the fryer looking like a failed bialy. But I tell you, it was the best goddamn fried chicken I’d ever eaten. Every bite was juicy and perfect, with small pockets of fat literally exploding on my eager tongue. I used to HUNT for backhendl in that kitchen, and again when I was old and clean enough to order it as a customer instead of as a worker eating off the plates of others. Again, I was baffled as to why finding that dish was harder than finding a preserved negative of Jerry Lewis’ Holocaust clown movie.

And I remain baffled. There’s a gigantic hole in the chicken sandwich market and BIG FAST FOOD is either too blind or too lazy to take advantage of it. They will lash their poor employees with a cat-o-nine-tails to keep them churning out white meat sandwiches. But ask them to make a dark meat sandwich and they’ll probably point you to reams of focus group paperwork and actuary tables suggesting such a feat would be impractical and ever-so-slightly less profitable for them.

To which I say: BULLSHIT. Fucking cowards. You wanna know why the regular Popeyes chicken is better than their new sandwich? Because dark meat is the default, that’s why. Your three-piece meal comes with a leg, thigh, and wing (wings are technically white meat but please shut up about it). Now imagine THAT chicken in sandwich form. Imagine all that fatty goodness on a bun. Now ask why you even need to imagine such a thing when it could be made so real, so quickly.

Drew Magary is an in-house columnist at GEN magazine and a former columnist at Deadspin and GQ. He also won Chopped, with a fried meat dish by the way.

Disclosure: David Chang is producing shows for Hulu in partnership with Vox Media Studios, part of Eater’s parent company, Vox Media. No Eater staff member is involved in the production of those shows, and this does not impact coverage on Eater.