Home Dinner It Starts With the Roux 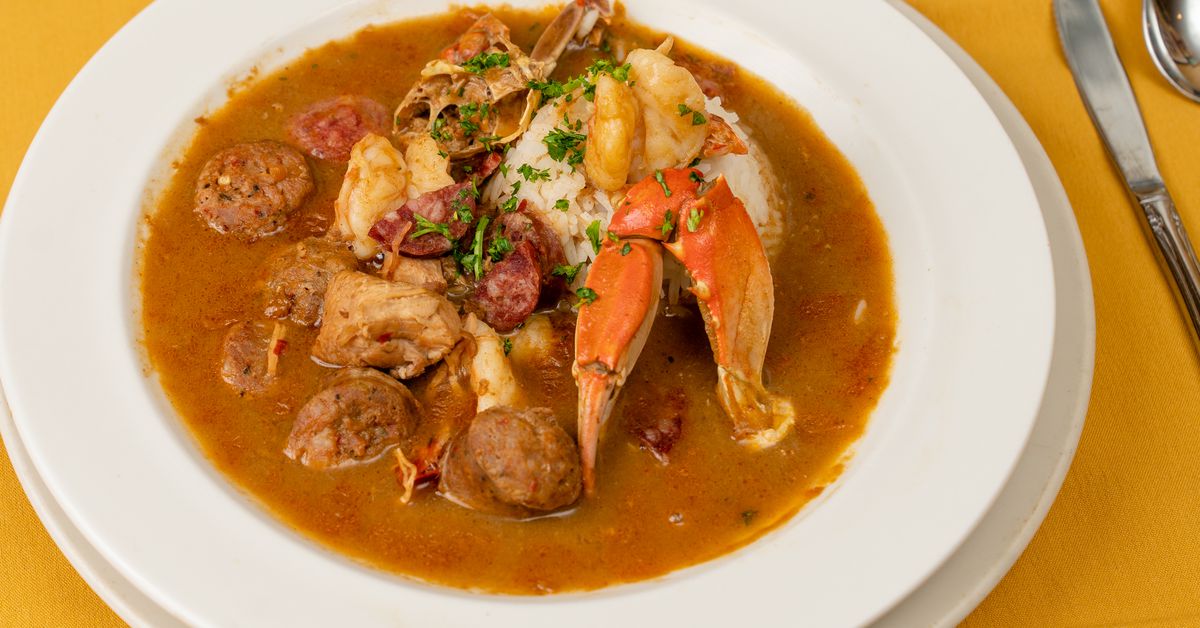 According to my mother, Jacqueline Leeper — a native New Orleanian — her grandmother, Mama Ida, sourced the ingredients for their gumbo from the bayou that was close by to Napoleonville. “The tradition for gumbo depends on the locality in Louisiana where you’re from,” she says. “People make a Creole gumbo; some people call it a New Orleans-style gumbo. It depends on where you are and who you’re talking to.”

Gumbo is derived from the word “gombo,” which translates to “okra” in many West African languages. The earliest recorded recipes for the dish include okra as a main ingredient, not necessarily as an afterthought or add-in by a cook who is being inventive or cleaning out their refrigerator. As James Beard award-winning author Toni Tipton-Martin writes in her new cookbook, Jubilee, “Devotees [of okra-based gumbo] love that slime; it thickens gumbo and gives the stew body.”

While the roots of gumbo are undeniably African, many other influences informed the style in which it is cooked today across cultures and locales. Gumbo is an adaptable dish. Contributions from Native American, French, Spanish, and Caribbean people have led to a fusion of culinary creativity that all landed in one massive pot — a commingling that may have never happened without the atrocities of the trans-Atlantic slave trade and the ill treatment and near genocide of indigenous peoples in the new world. Southern Foodways Alliance founder John Egerton writes in the foreword to Tipton-Martin’s award winning book, The Jemima Code, “We might conclude that nothing good and lasting could have come from the arbitrary confinement of black women and their white governesses to the southern kitchen…. And, we might be almost entirely right about that nothing good — except the fusion of European and African foodstuffs and culinary skills.”

In the New World, enslaved Africans may have run the plantation kitchens, but they were cooking for European, later turned American, masters. That domestic work was left to the women: the white mistresses who wanted a certain menu, and the enslaved cooks who were forced to learn the styles and techniques to prepare it. This side-by-side workmanship is how a decidedly African dish became French or Creole in the newly formed United States. It is also one of the vehicles by which class and socioeconomic status were reinforced. The food created by enslaved Africans for their owners was made from the best fresh ingredients, instead of the leftovers rationed to enslaved people and whatever they could grow on their own.

Gumbo, in a sense, is the best part of the worst moments of our history. It is the legacy of both make-do cabin cooking in the slave quarters and the opulence of fine dining during parties at the plantation house. It is the syncretism of culture, race, and class, but most importantly, it is the lasting connection between kin.

The forced fusion of food, a byproduct of America’s original sin, is why generations of my family learned to make gumbo from a roux. The roux represents the French and/or Creole influences on the dish, which go back to the lineage of people who occupied and colonized Louisiana before it was sold to America, and that lineage and tradition of cooking has lasted for centuries. Gumbo became a regional staple across many states in the South. Depending upon where you are in the country, then or now, the dish takes on the taste of the community where the ingredients have been sourced and the cooks who’ve prepared it.

The Creole or seafood gumbo of New Orleans is one of the best-known, and best-documented, types of gumbo. However, the earliest references to gumbo in general date to the early 1800s. In the Louisiana Entertains cookbook from the 1984 Louisiana World Exposition, a good gumbo is compared to a good sunset, with no two being exactly alike. “An exciting gumbo combines seafood or game with pungent Creole seasoning to become a uniquely flavored soup,” the book reads, “thickened with either okra — a vegetable lent by Africa to Louisiana — or filé, powdered sassafras leaves introduced by the Choctaw Indians.” Following this description are four recipes for gumbo (seafood, chicken, wild duck, and dove) with the seafood or Creole gumbo first — possibly denoting popularity, or the most common of the gumbo derivations.

In New Orleans today, one of the most popular places serving the dish is the famed Dooky Chase’s Restaurant. “In our family, it was always a tradition,” manager Stella Chase Reese says. “We serve Creole gumbo here; we’re known for our Creole gumbo.”

The Creole gumbo created by the late Leah Chase, who was a 2016 James Beard Foundation Lifetime Achievement Award winner, has been served for decades to freedom riders, civil rights leaders, presidents, and, as my mother recalled, black students in a still-segregated New Orleans who wanted to go somewhere nice after prom. With the history that took place over a bowl of gumbo at Dooky Chase’s as rich as the dish itself, Ms. Chase used to proclaim she could solve the problems of the world with her gumbo.

“What made her say that was we [at Dooky Chase’s] have been in existence for 79 years, almost. And we have the opportunity of serving many people of all cultures,” says Reese. “She figured if you enjoyed her Creole gumbo, it would be able to solve all the problems, because it was just that good.”

Whether it is Creole, Cajun, seafood gumbo, okra gumbo, or gumbo z’herbes (a mixture of seven or more greens, often with smoked meats and poultry, and the “queen of all gumbos” according to Tipton-Martin), there is an expectation of goodness — good tasting, good smelling, and soul satisfying — when you sit down for a bowl. That goodness derives from the dish’s rich history and varied influences, as well as the generational knowledge and familial traditions that surround it. All of that is expected when the brown or green (for gumbo z’herbes) stew served atop rice is placed in front of any diner, whether they’re a gumbo novice or an aficionado.

As I prepare to go to the grocery store, buy my ingredients, pull out my pot, and make gumbo for my own family, I am grateful for the shared history and legacy, no matter the origin. I’m looking forward to stirring my roux until it is silky to make what Tipton-Martin calls a “sultry gumbo,” one “built, perhaps on a foundation of humble sustenance, but layered with spice, flavors, and aromas, embellished by the whim and skills of the cook, served with grace and richness as well as love.”

Nikesha Elise Williams is a two-time Emmy award-winning producer and the author of the forthcoming novel Beyond Bourbon Street, centered around the 15th anniversary of Hurricane Katrina.