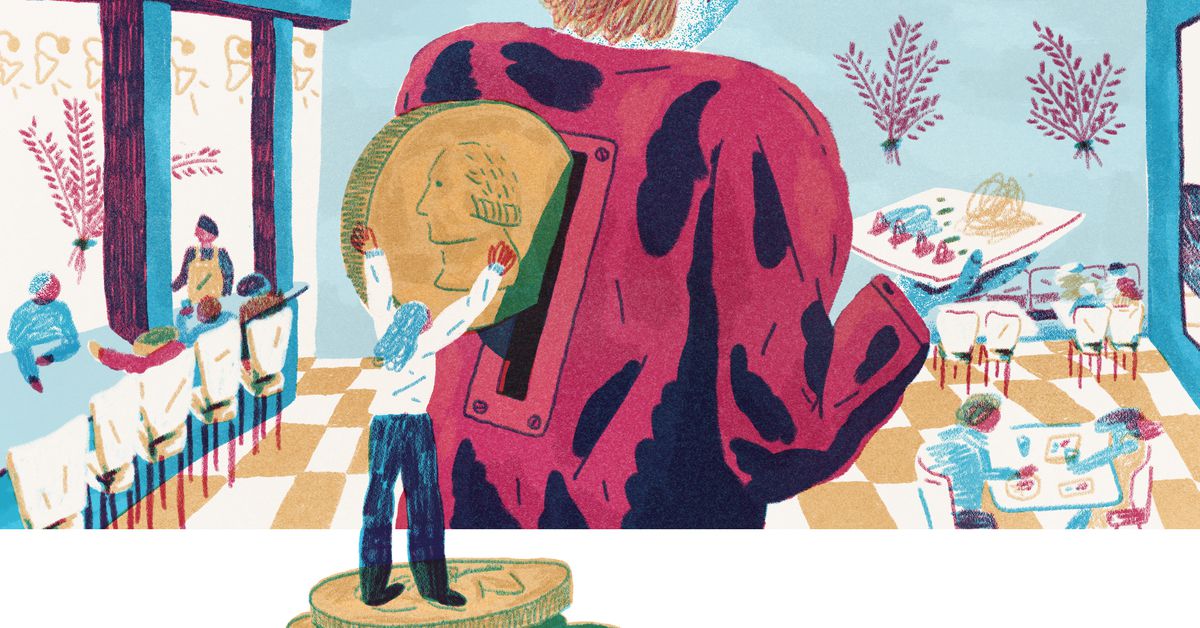 This is Eater Voices, where chefs, restaurateurs, writers, and industry insiders share their perspectives about the food world, tackling a range of topics through the lens of personal experience. First-time writer? Don’t worry, we’ll pair you with an editor to make sure your piece hits the mark. If you want to write an Eater Voices essay, please send us a couple paragraphs explaining what you want to write about and why you are the person to write it to voices@eater.com.

The fine dining scene in New York City is changing fast. It’s getting harder and harder to run a small business in this city, and I believe a lot of fine dining restaurants will close in the next couple of years. While I’m doing everything in my power to ensure mine isn’t one of them, the odds are against me. And if you were to believe some recent headlines, being required to pay my employees $15 per hour is the main reason why.

These stories are all based on a single survey from the local lobbying organization NYC Hospitality Alliance, conducted in December 2018, which summarized its self-described “powerful insights” as follows:

It then classifies the New York restaurant scene as “stagnant” and devotes most of its introduction to lobbying Gov. Andrew Cuomo to keep the tip credit. (The tip credit allows restaurant owners to pay a tipped employee less than minimum wage as long as their tips get them to the minimum. On January 1, 2019, it went from $8.65 to $10 per hour.)

This is a business that has never met a deep, systemic problem that it couldn’t answer with a poorly reasoned, short-term solution.

Change is scary. So it’s a relief to see that in the face of all this change, the restaurant business* is holding strong to its chief characteristic: short-sightedness. This is a business that has never met a deep, systemic problem that it couldn’t answer with a poorly reasoned, short-term solution — the shallower the better. Maybe if restaurant lobbying groups hadn’t helped lead the fight to keep the minimum wage stagnant for so many years, then the minimum wage would have risen slowly and reasonably, keeping pace with the cost of living, and we wouldn’t be confronting this big jump now.

Because I’m a woman, and therefore prone to hysteria and unable to understand logic, economics, or how to run a business, I’m allowed to say irrational things like: The minimum wage increase isn’t the sole cause of our problems. It’s not even the main cause. Running a restaurant in New York City right now is pure insanity. Rents (both commercial and residential) are out of control and so are labor costs, and those are the two biggest makers of this madness. And while the minimum wage affects labor costs, payroll was a problem long before January 1, 2019.

I barely felt this minimum wage increase. I had to raise a few of my part-time prep workers from $15 an hour to $16 or $17 because suddenly everyone was paying their back of house $15 an hour, and I need to keep my pay rates competitive. But otherwise, my payroll barely budged. My front-of-house workers already make between $25 and $30 an hour. My back-of-house team gets $17 to $20 an hour.

Apparently, I am an idiot for thinking the minimum wage is just that — the bare minimum. Why would I expect my employees to give me their best if I’m giving them the minimum? I also wonder how anyone who makes more than minimum wage feels comfortable eating in a restaurant that pays its employees minimum wage, but then again, I’m from Canada and we’re encouraged to think that way.

Why would I expect my employees to give me their best if I’m giving them the minimum?

What’s more difficult than a mandated increase in the minimum wage is that my back-of-house wages will still have to go up this year to accommodate New York City’s inflated cost of living, which has far outstripped what you can earn in a restaurant kitchen. As fewer and fewer good cooks live in the city, we have to do more and more to keep them. That’s the free market at work, but NYC’s cost of living distorts the free market in all kinds of fun ways. Recently, I got introduced to a new negotiating tactic among young cooks: Wait until the middle of a busy shift and then threaten to walk off the line unless you get a $5/hour raise. In the past, that kid would have been kicked out of the kitchen so fast his head would spin, but today he knows that replacements are hard to come by and so I have to keep him on for at least a couple more days at his increased rate.

As I have to pay more and more to keep workers, I’m also hit by costs the customer will never see. Beyond every dollar I raise my 25-person staff’s wages, I’m also paying another $35,000 per year in payroll taxes, general liability insurance, LLC insurance, unemployment insurance, and worker’s comp, all of which are pegged to the size of your payroll.

For fine dining to survive the labor shortage and the ever-increasing price of doing business in New York City, we may have to go against our nature — blaming government-mandated minimums that are still not a living wage — and embrace a long-term solution, like raising menu prices.

You may have already noticed prices creeping up this year, and I fully expect they’re going to keep on creeping. Restaurants have long kept their menu prices down by keeping their labor costs low, mostly by pushing tipping as a business model, which shifts the salaries for their front-of-house employees onto the customers as a surcharge in the form of a “voluntary” tip. But the cost of doing business is going up faster than even the tipping model can keep up with, and price increases are the next step.

Raising my menu prices and getting rid of tipping has allowed me to pay my employees more, and so far I don’t seem to be losing customers.

Customers who don’t want to spend more money are going to default to fast-casual options, or they’re going to go to restaurants that use more automation. If you think robots aren’t coming for your job, I wish you’d been with me when I went to a beer bar in Virginia where I swiped my card over the tap I wanted and a POS system charged me by the ounce. Food came from a pick-up window in back. Labor costs? Some cooks, some bussers, and a cashier up front. That’s the future. You want the human touch? You’re going to have to pay extra for it. You’re a bartender? Too bad. Those jobs will be gone.

The biggest effect of the restaurant business’s short-sightedness is the one that depresses me the most, and I don’t know how it can be reversed: New York City is losing its soul. More and more restaurants here are actually restaurant concepts, designed to be replicated elsewhere, not unique one-of-a-kind dining experiences. There’s nothing wrong with making money, but if that becomes the sole metric of success, then we’re doomed to lose what made us the greatest food city in North America. Failing to keep the city viable for restaurants that experiment means ceding our innovation elsewhere.

New York has less and less room for young chefs with big ideas. The financial stakes are too high, so more and more menus play it safe, sticking to the same familiar items because they need to appeal to the most possible customers. I moved to New York in 1992 because this city’s food scene was alive and exciting and adventurous in a way nowhere else was. If I were a young chef in 2019, I would have a hard time coming up with reasons to move here at all. I can sell a beet and goat cheese salad anywhere. I don’t have to pay NYC rents to peddle yet another plate of crudo.

Raising my menu prices and getting rid of tipping has allowed me to pay my employees more, and so far I don’t seem to be losing customers, but who knows how long that will last? What I did may not be the best solution, but it’s a solution, and right now I don’t see other restaurateurs coming up with alternatives. To survive, we need to work together to figure out long-term solutions that will let us treat our employees better, keep our customers, and protect this city’s culinary creativity. Even then there are no guarantees, but one thing I can guarantee is that if we don’t work together, then one by one we’re all going to close — except for the places with the deepest pockets and the most aversion to risk.

Maybe the NYC Hospitality Alliance’s survey was more accurate than they knew. Not for its results, but for calling this city’s dining scene stagnant. Fortunately, if you fear change, if you don’t like competition, if you don’t want menus that surprise you, then there’s no need to do anything at all. If we leave it to the people who currently claim to represent the restaurant business, we’ll remain stagnant right up until the moment we close.

*I don’t believe in a restaurant “industry.” An industry is regulated and has a central governing body and shared standards. We’re more like a herd of drunk cats, running around in circles and peeing on the furniture. However, writing “the restaurant herd of drunk cats” over and over is exhausting, so let’s settle on “business.”

Amanda Cohen is the chef and owner of Dirt Candy in New York City. Vance Lump is a freelance illustrator in the Pacific Northwest.
Editor: Hillary Dixler Canavan