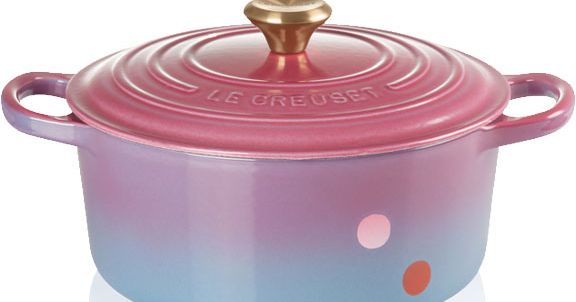 Le Creuset is an icon of cookware, and Star Wars is an iconic movie, but despite those facts I don’t think anyone imagined a world in which those two brands overlapped. But Star Wars fans who want to make that fandom an integral part of braising short ribs (whoever you are) should be thrilled to learn that Le Creuset just announced a Star Wars line of products. Unfortunately, they specify that “cookware does not emit sounds or illuminate.” Boooooo.

The line will be available starting November 1, both online, at Le Creuset stores, and Williams Sonoma. The products include a casserole dish featuring the image of Han Solo frozen in carbonite (for when you want to think about someone trapped alive in your hot dish), Droid-patterned cocottes, a Dutch oven with a relief Darth Vader lid, and the piece de resistance, a hand-painted Dutch oven made to look like the double sunset over Tatooine, only nine of which will be made. It will cost $900, and you need to sign up in advance for the opportunity to own one.

Le Creuset has partnered with Disney before, creating a 90th anniversary Mickey collection, and a pot inspired by Beauty and the Beast, so more Disney property collaborations make sense for them. Will anyone you know who buys one of these make a ton of insufferable jokes about the Force whenever their soup finally comes to a simmer? Absolutely. Am I adopting the Porg pie bird and treating him as a pet? No comment.

Update: October 4, 2019, 4:42 p.m.: This article was updated to include new information about availability.