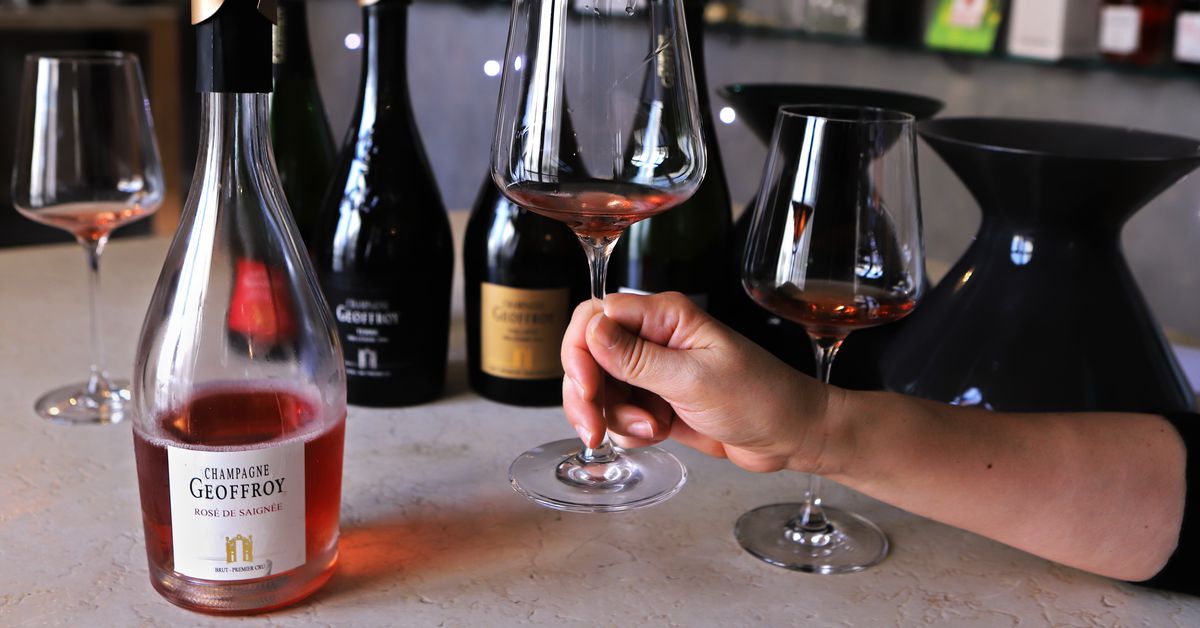 Pink Champagne gets a bad rap. It’s excluded from bottle shop shelves and wine lists or else tokenized to a single offering, maybe two if you’re lucky, and we pretty much only pay attention to it once a year — around Valentine’s Day. Even then, most of what’s poured is of the bubblegum Barbie convertible, dyed poodle, spun cotton candy and pastel Easter egg variety, bottled in elaborate frilly packaging with a promotional budget to match.

But there is another pink Champagne, made in a style capable of expressing the region’s remarkable history while pushing boundaries of taste and vibe. I’m talking about rosé de saignée, a long-tenured but underappreciated style of winemaking that upends how most people think of pink bubbles (flirty, light, retro femme) and reimagines the drink as something entirely more appropriate for our post-romance reality in 2020: a delicious subversion of pink wine that looks more like rust, gore, and the real guts inside you. These wines can be heavy, iron-rich, bloody sorts of things (“saignée” after all means “a bleeding” in French); they can also be wildly flavorful and idiosyncratic, drinking more like a Negroni or some dream-born aperitif. In his book Champagne, wine critic Peter Liem notes they’re “darker in color and more pungent in aroma in their youth.”

“It’s a gateway drug between red wine and sparkling,” says Ariel Arce, the founder of Air’s Champagne Parlor in New York City and the undisputed Champagne Empress of Greenwich Village. “You’re making a red wine first and foremost and then fermenting it.” This involves “bleeding” off rich red wine juice at the start of the winemaking process, which is where saignée gets its name. In contrast, the more common rosé Champagne style is made by adding still red wine to regular white Champagne to produce something light and pink.

Rosé de saignée scratches the natural wine itch and tastes wholly unlike any other version of Champagne — all wild, technicolor glimmer in the glass and big, beguiling flavors in each sip — and yet, it still has that ineffable Champagne quality that comes from a fusion of terroir, winemaking skill, and history.

In Champagne over the last century there has been a traditional split, wherein most of the large houses, or Grande Marques, like Krug and Bollinger buy up grapes for their blends from small, independent growers across the region. While a few of these houses make Champagne in the rosé de saignée style, including Drappier and Laurent-Perrier, blended Champagne from the big houses makes up around 95 percent of what’s imported to the United States.

But in the last decade, international interest born first in the bistros of Paris and London has raised the profile of Champagne winemakers willing to take chances, bottling their own wines and selling them under independent labels. This is the “Grower Champagne” movement, and it represents a young generation of winemakers (many from long-established farmer families) who are applying the culture and methods of natural wine to the terroir of Champagne, creating a new vision for what wine from this region can be. Think of Grower Champagnes like single malt scotch or single origin espresso: By taking something traditionally meant for blending and offering it a focused expression, you wind up drinking something unique. Plus Grower Champagnes offer fantastic value — good entry level Grower Champagne from idiosyncratic winemakers like Christophe Mignon or Frederic Savart start at around $40, at least for now.

A small fraction of these indie Champagne vignerons make wine in the rosé de saignée style, and only typically those working with top quality pinot noir or pinot meunier grapes (two of the three traditional grapes in the Champagne blend, along with chardonnay). “It takes a lot of talent to make in this style,” says Arce, “and so the good ones can be pretty ethereal, like dried potpourri, or sometimes animalistic with incredible complexity.” These wines are different from any other sparkling bubbly you can find, utterly singular and frankly dank, to use the West Coast stoner lingo of my youth. And they’re perfect for whatever form of Valentine’s Day you choose to celebrate — although they’re also great with barbecue, or weeknight pho takeout, or vegan tacos from the taco cart.

Rosé de saignée is a method with a long history, but not a lot of mass market hype. You’ll need to go to a good wine shop to get it, or a specialist Champagne bar like Air’s, Ambonnay in Portland, the Riddler in San Francisco and New York, or Bubbledogs in London. But if there’s a bar or bottle list specializing in natural wine near you, chances are they’ve got some and will be delighted that you’re asking for it.

I’ve picked out five you should try, all from indie growers, but first I want to talk about that word — “saignée” — because a lot of wine is hidden behind foreign language rules, and it makes for unfortunate gatekeeping. Do I say the “g” or is it silent? Is the first part “say” or “see”? Does the end sound like “knee” or “nay”, or what? In French, it’s pronounced “sen-yay,” but in American wine circles I’ve most often heard it pronounced “sohn-yay.” Here’s an easy cheat: Saignée rhymes with Kanye. If I were a rapper/producer/avant-garde sneaker designer, I’d be Saignée West. Watch the throne, don’t let me get in my zone, etc, and happy drinking.

This is a rad introduction to the style and tastes remarkably like a Negroni cocktail. Perfect before dinner or on its own on a warm summer day in the park.

This is probably the easiest saignée style Champagne to find on the U.S. market, and totally delicious: think rose water and clove cigarettes finishing like good, dry gin.

It’s, in a word, bonkers — as far out there as the saignée style gets, weighty and wild and loaded with floral flavors. This is big heartbreak wine, as though the human heart itself had been rung out into a bottle and finished with a dash of cigarette ash.

This is grown up adult interest Champagne that tastes more like drinking sparkling red Burgundy. Made from a single tiny parcel of land from 100 percent pinot meunier grapes, this is deep, primal, bloody red sparkling wine that totally subverts what Champagne can be. Expensive and worth it, like you.

Jordan Michelman is a freelance food and wine journalist in Portland, Oregon, and the co-founder of Sprudge and Sprudge Wine.

Vox Media has affiliate partnerships. These do not influence editorial content, though Vox Media may earn commissions for products purchased via affiliate links. For more information, see our ethics policy.